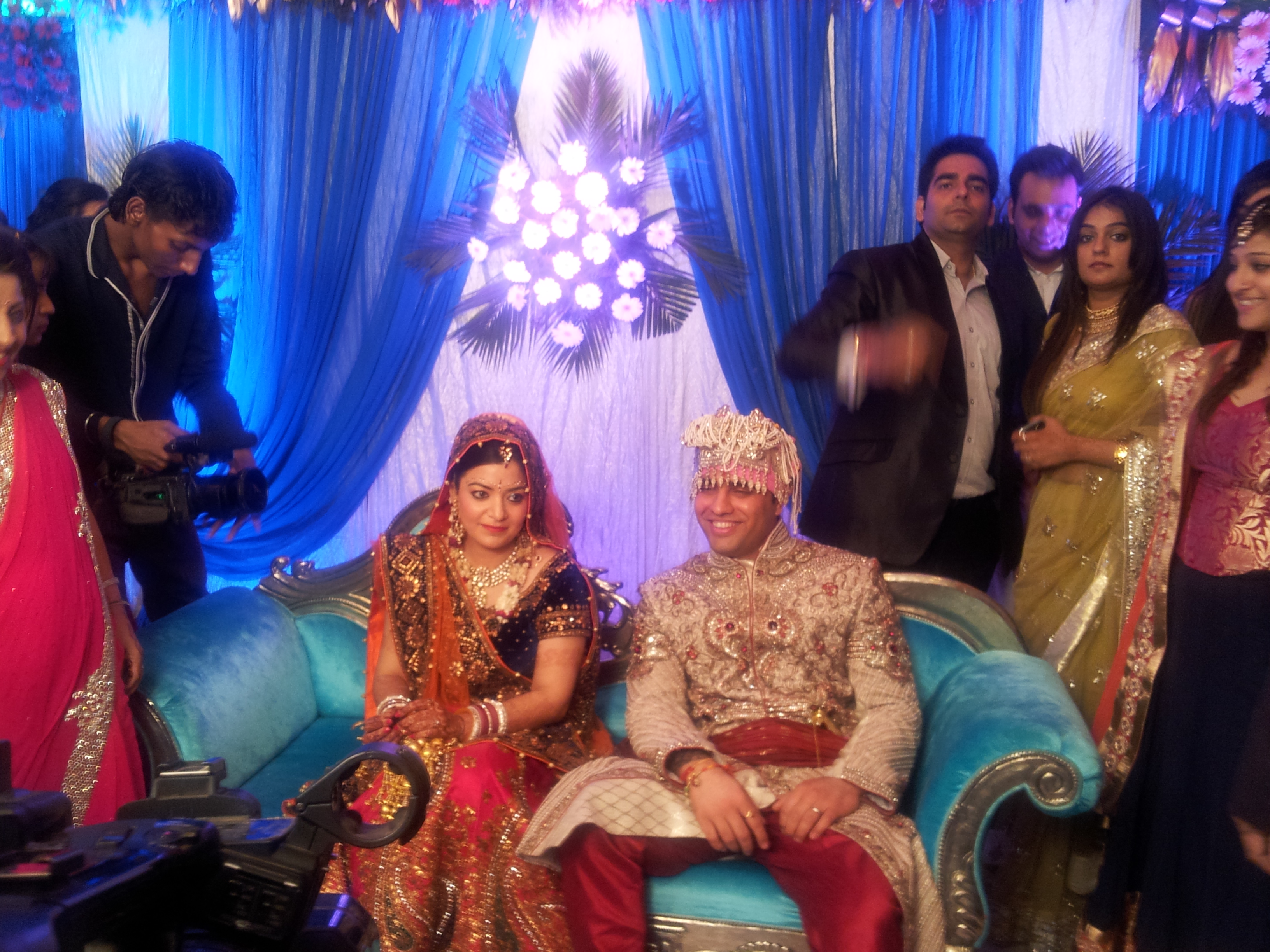 The lovely bride and the groom

After only a few months in Delhi, an Indian friend who is really close to our group of expats, invited a few people from the flat to his sister’s wedding, and lucky for me, I was included. My first two thoughts after hearing the news were: “I can’t believe my luck, but isn’t it weird I don’t know the bride?“ and “finally I’ll be able to wear an Indian Saree“.

Regarding the first thought, Indian weddings are something very important to families here, and they don’t tend to be as intimate as many western weddings. Indians like having a lot of guests at their weddings (I’ve heard of weddings with more than 2000 guests) and for some Indians (not the case of our friend) having foreigners in an event like this, is seen as something “exotic” (I’m not sure what would be the appropriate expression to describe it). So here I was, being asked to attend a wedding of someone I’ve never met (in 90% of weddings in Colombia it is mandatory to be somehow close to either the groom or bride -unless you are a plus one-), but for my friend it was a huge deal that we would be able to celebrate with him this special moment for his family.

After these realizations, came the most important part of being invited to a wedding and the second thought in my mind after receiving the invitation: Choosing the outfit! And of course, what would be more appropriate, amazing and absolutely gorgeous than to wear an Indian Saree to a wedding in New Delhi? Nothing! And as far as I’m concerned, I will be in India for only one year, so I needed to make the most of this moment and wear a Saree.

Soon, my Colombian friend and I started the search of the perfect outfit in all the markets in New Delhi, starting in Lajpat Market which is the closest to our flat. After an entire evening in the “Saree hunting”, we were pretty disappointed to find out that when they sell an Indian Saree, this only includes the long beautiful fabric you wrap around your waist and put over shoulder, but you still need to get tailored made that little blouse and the skirt that goes under the sheer fabric. We also considered wearing a salwar kameez, and even though they are beautiful, we weren’t sure if we were going to be able to pull off such an indian look, not knowing the appropriate way to style it.

When we returned to the flat, our Russian flatmate (who has been living in India for like 10 years now) told us she had 5 complete Indian Saree outfits and we could use them if we wanted. I liked a red one with embroidery on the sleeves, that happened to match perfectly with the only pair of decent heels that I’d packed in my suitcase. So up to this point, I was done with the outfit search, only missing the accessories, but a quick trip to Sarojini Market to get bangles, pashminas and bindis was enough. And since everything is so cheap there, I decided to buy a simple long black dress to go to pool parties on the weekends. 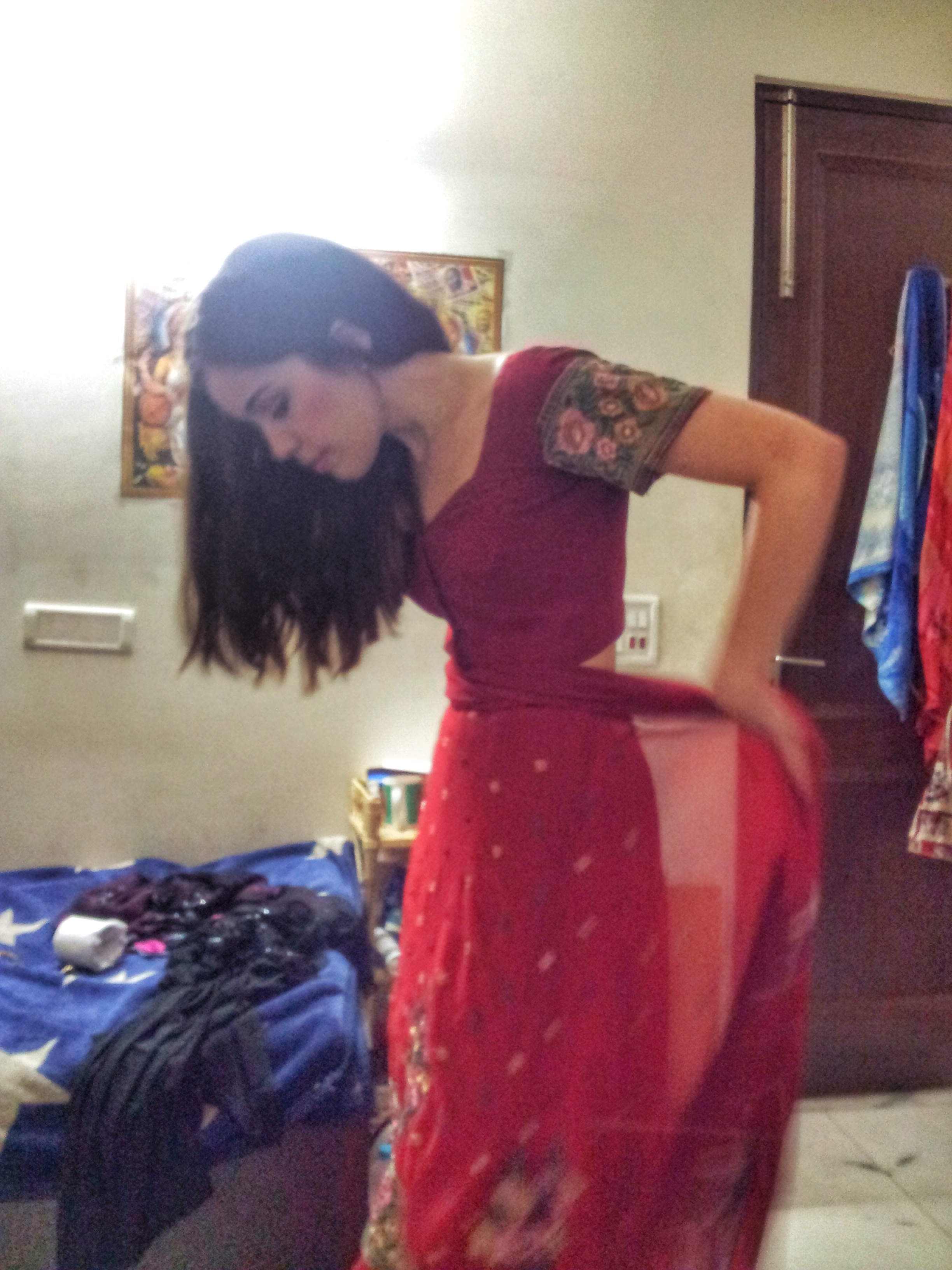 We went home to get ready for the big night, and my indian roommate started helping me put on the Saree.  First I got my heels on, that way she could calculate the exact length of the Saree. Then I put the cotton skirt that goes under the silk Indian Saree. It was covering my belly button and it was extremely tight around the waist. After that, she placed the silk around my hips and folded it many times inside the cotton skirt and finally, she put the last portion of the silk over my left shoulder.

“Where are the safety pins? We need those so it won’t fall down” She asked me. I had absolutely no idea about this, and of course, I didn’t think on buying a single one of those. But it didn’t matter, because by that moment I could hardly breathe from the cotton skirt being so tight, and the embroidery on the sleeves was way too uncomfortable and itchy every time I moved my arms. So after deciding the idea of wearing an Indian Saree was a big NO-NO, I had no choice but to wear the simple long black dress I got that afternoon, and all the accessories I could. 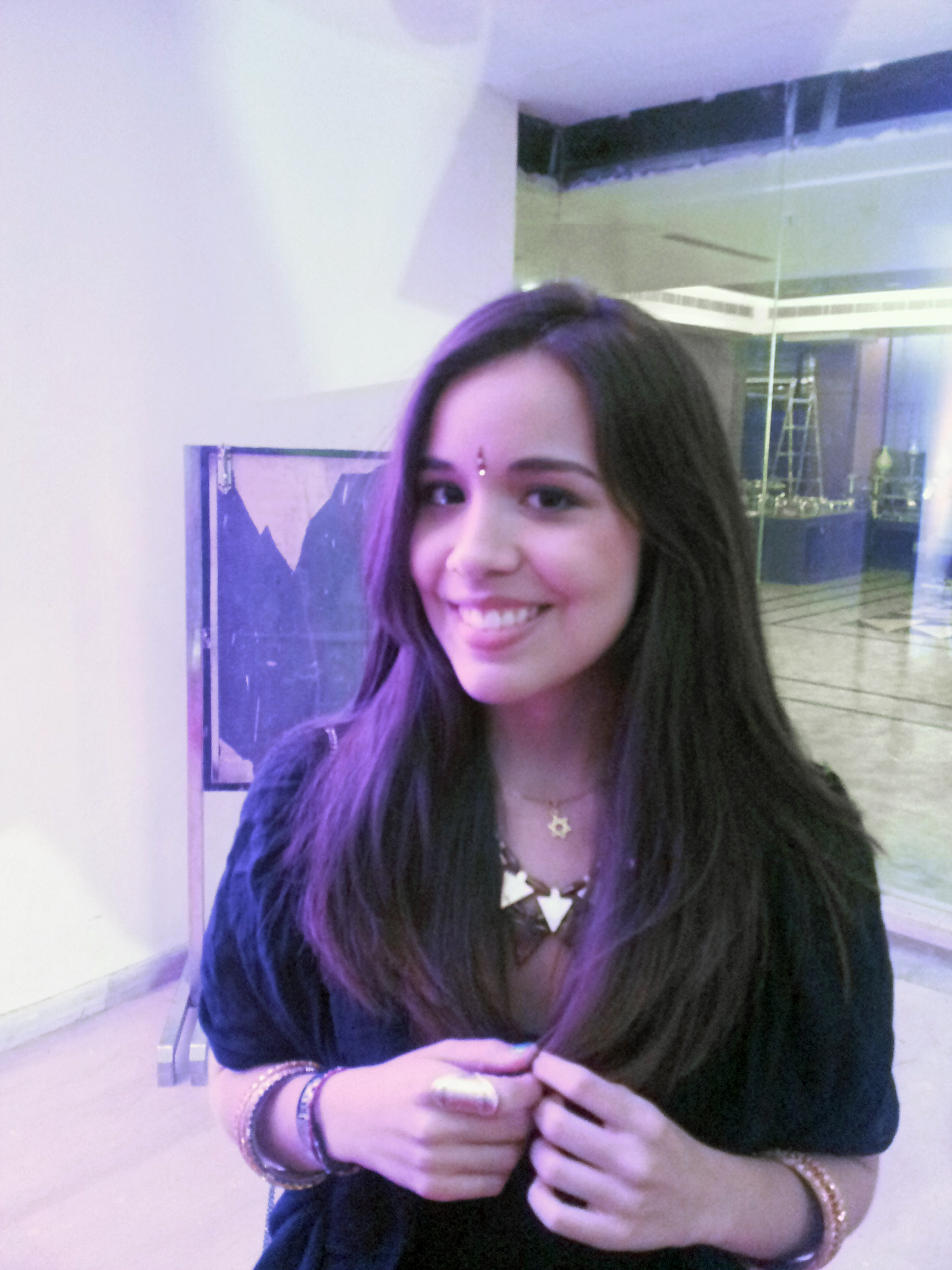 What I ended up wearing: a long black dress and accesories 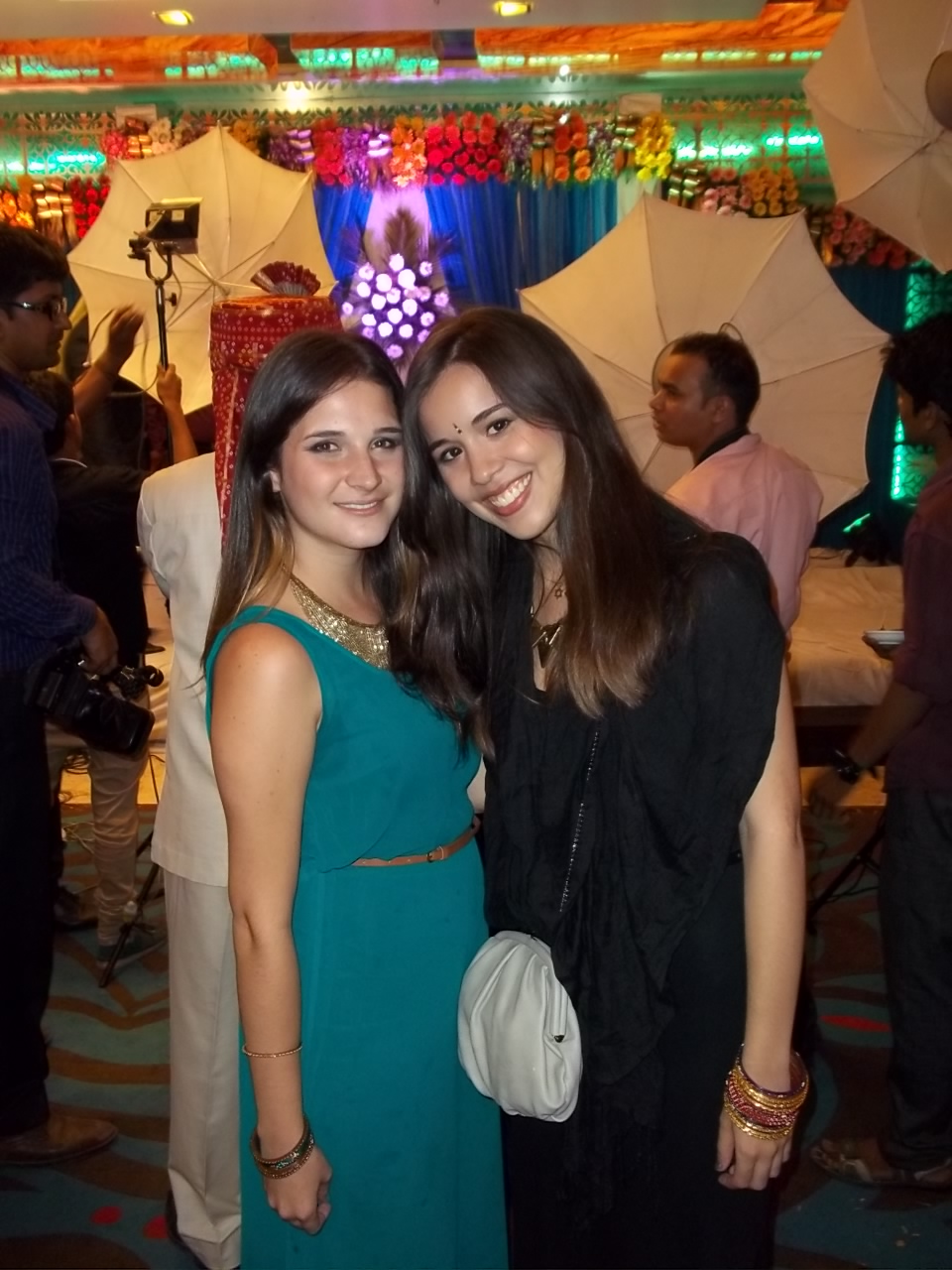 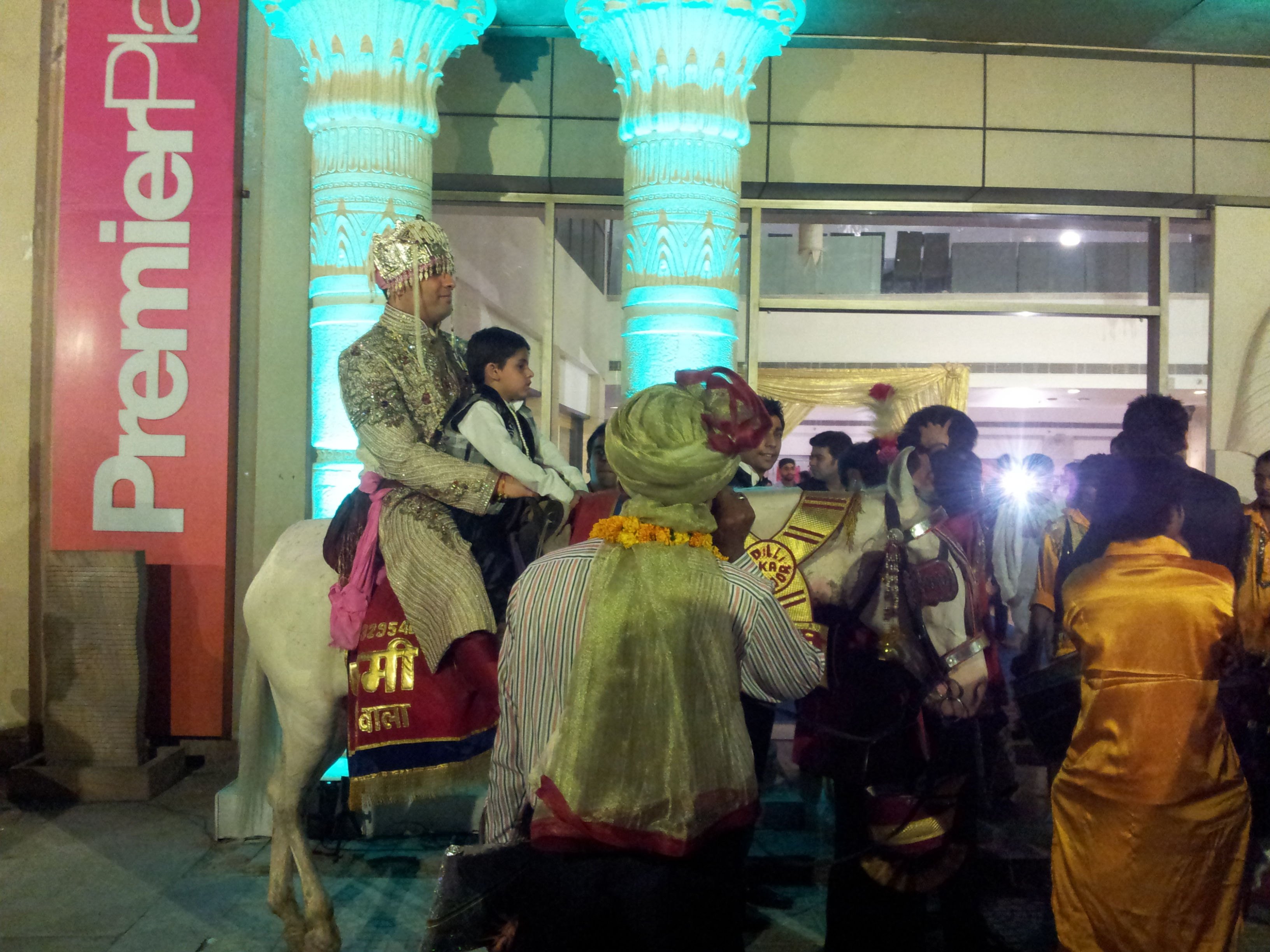 The groom arriving to the reception 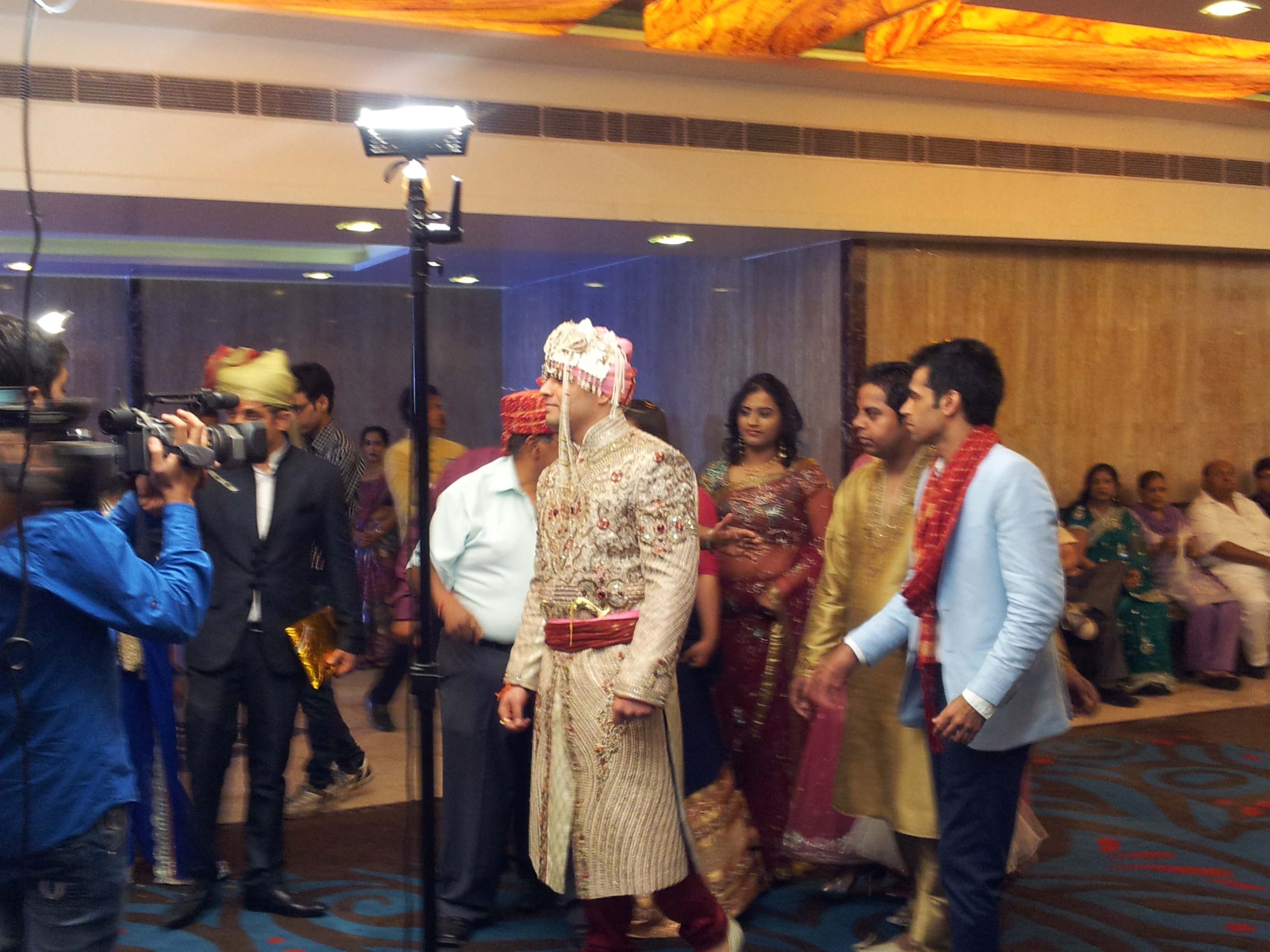 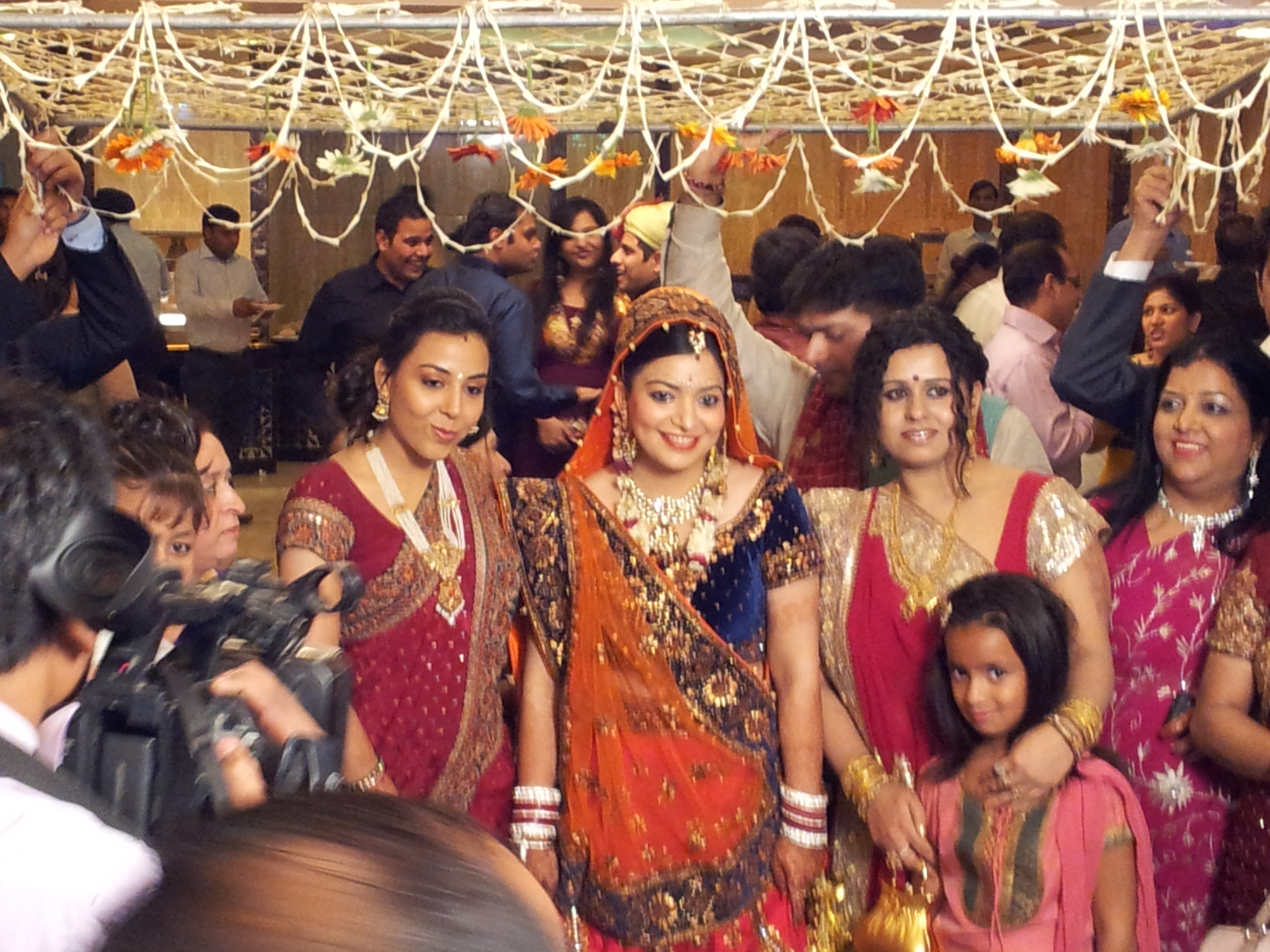 The bride making her entrance 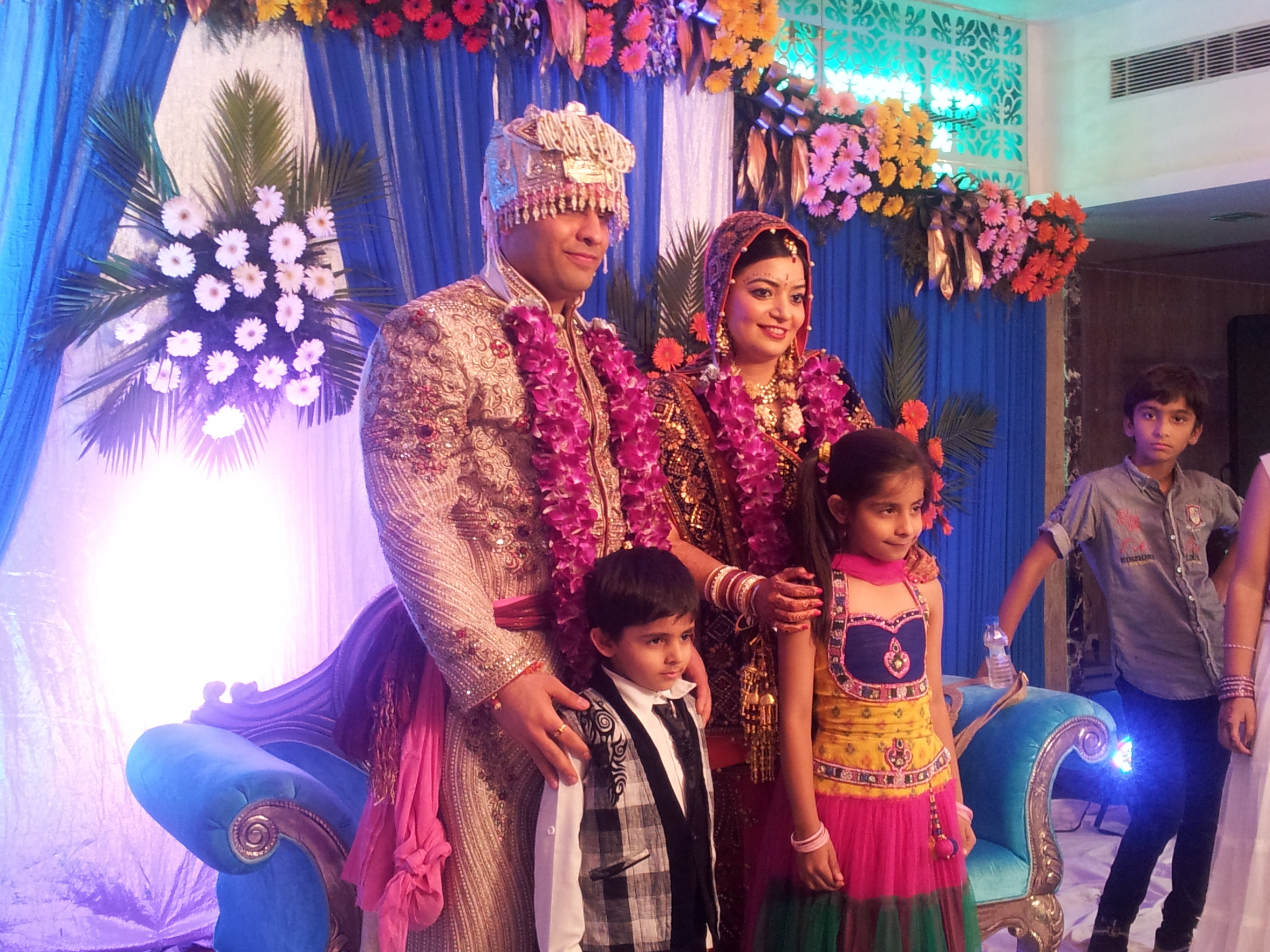 But when we got to the wedding I completely forgot about what I was wearing. Most of the guests were staring in a curious way, but that would have happened anyway, regardless of the outfit. The reception was in a hotel in South Delhi, and I can’t remember the last time I had so much fun in my life. We saw the groom arriving in a white horse, while some guys were playing the dhol (drums) and the male guest were dancing around him, throwing bills and singing. We were dancing as well but mostly watching. Later after that, the bride arrived in the most beautiful gown I’ve ever seen. She was wearing a lovely colorful saree and she had the traditional mehndi on her hands and feet.  After their arrival, the newlyweds sat all night and took pictures with the guests while the young people (including me and my friends along with the brother of the bride) danced to electronic music in Hindi. I ate so much delicious food, and I still can’t explain how I’m not double my size after that night. So I definitely can say that my night without an Indian Saree during my first Indian wedding was a complete success. Let’s wait if I can say the same about the other 300 nights I’ve got left here.

–> Check some of my favourite Indian Saree looks <–