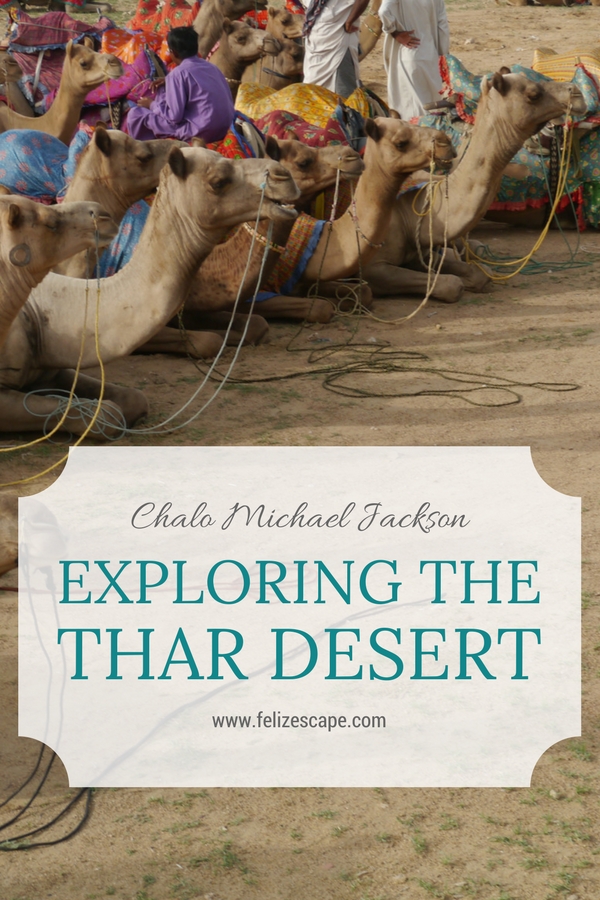 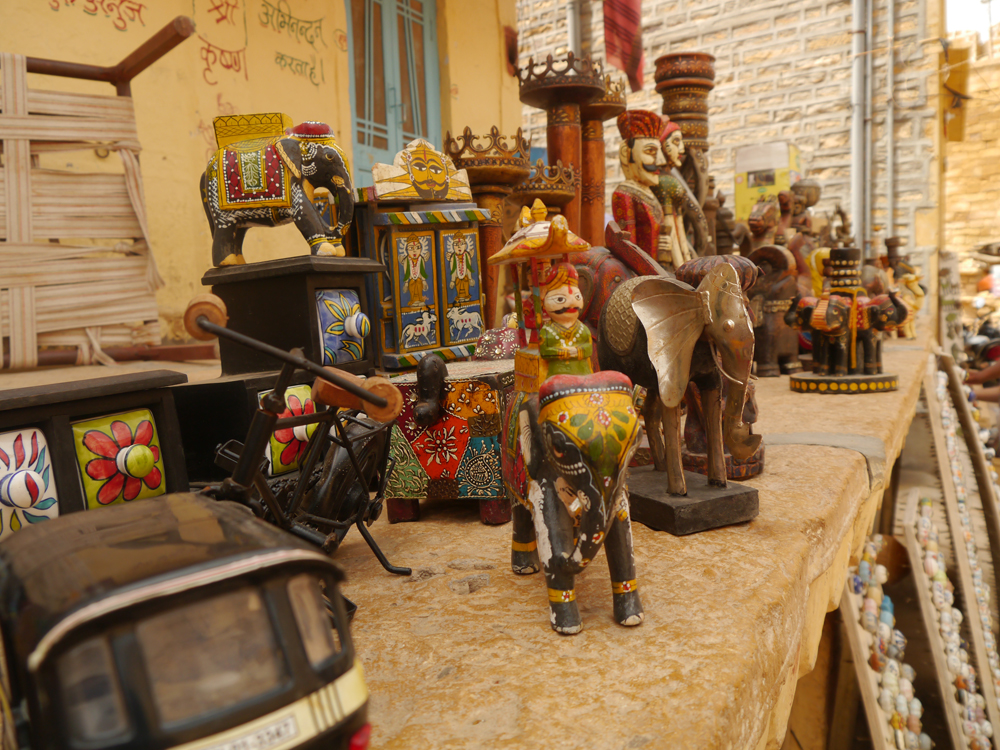 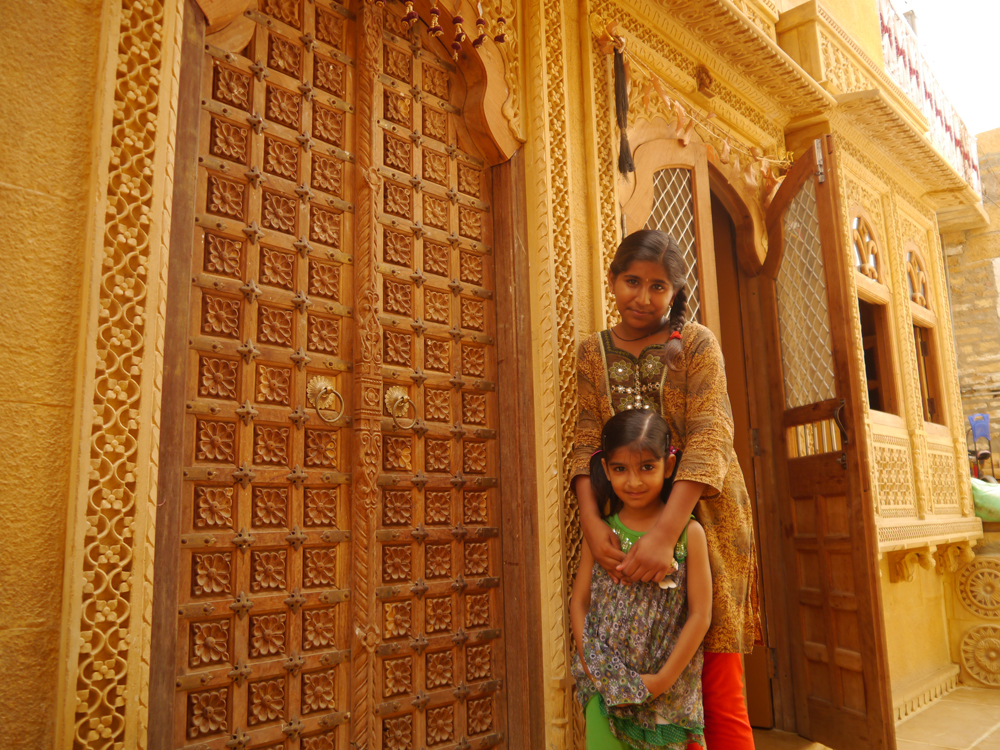 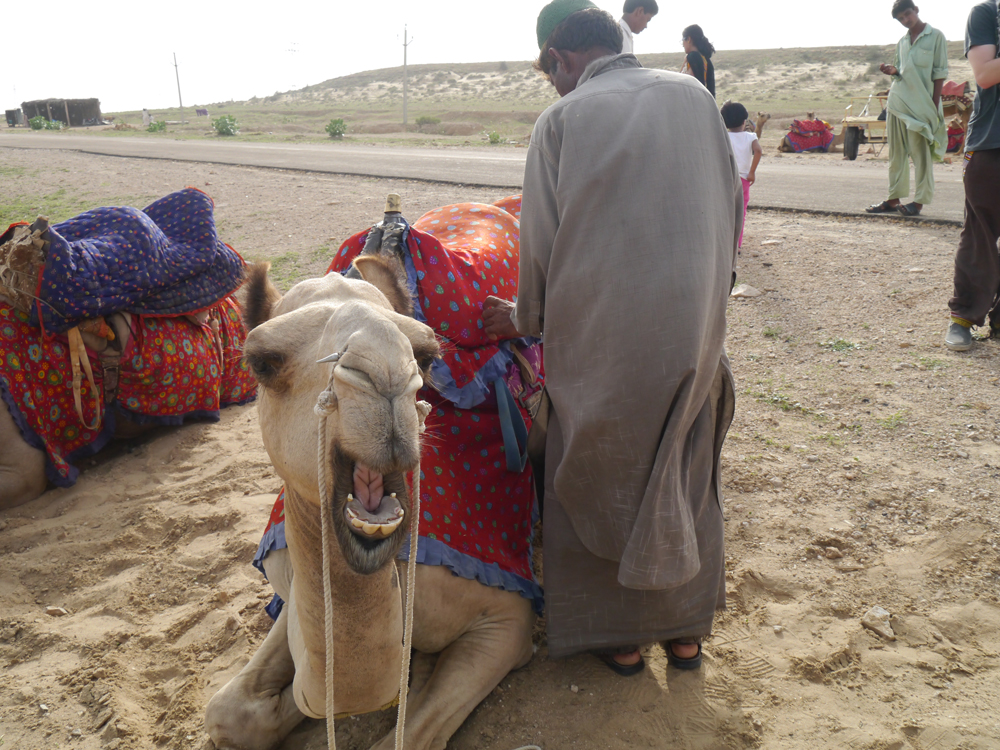 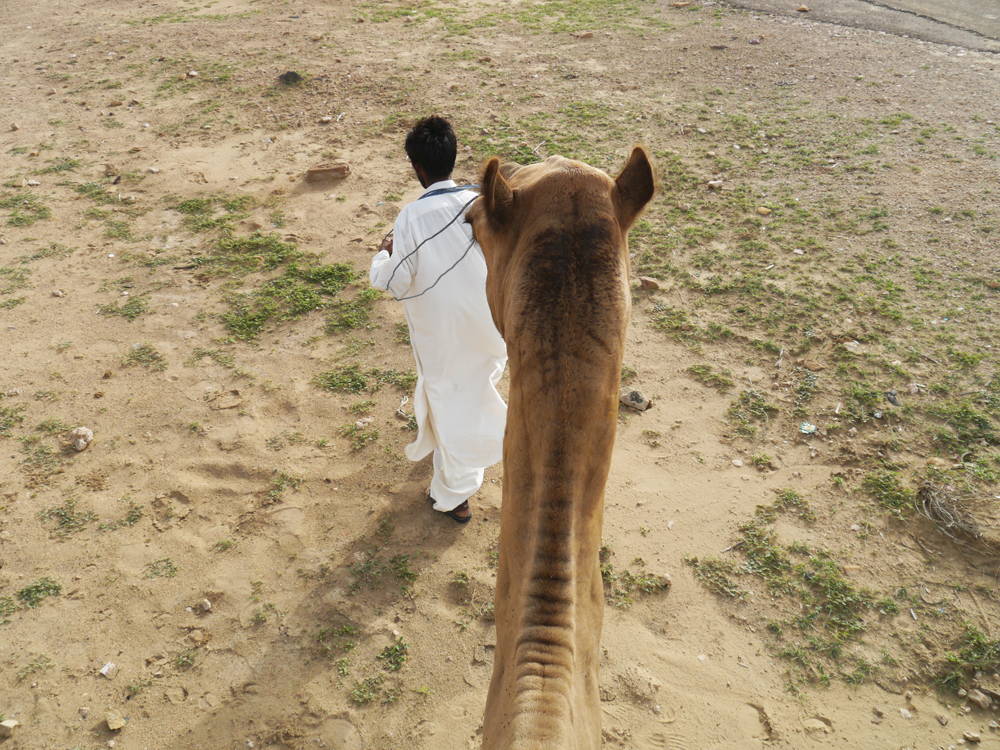 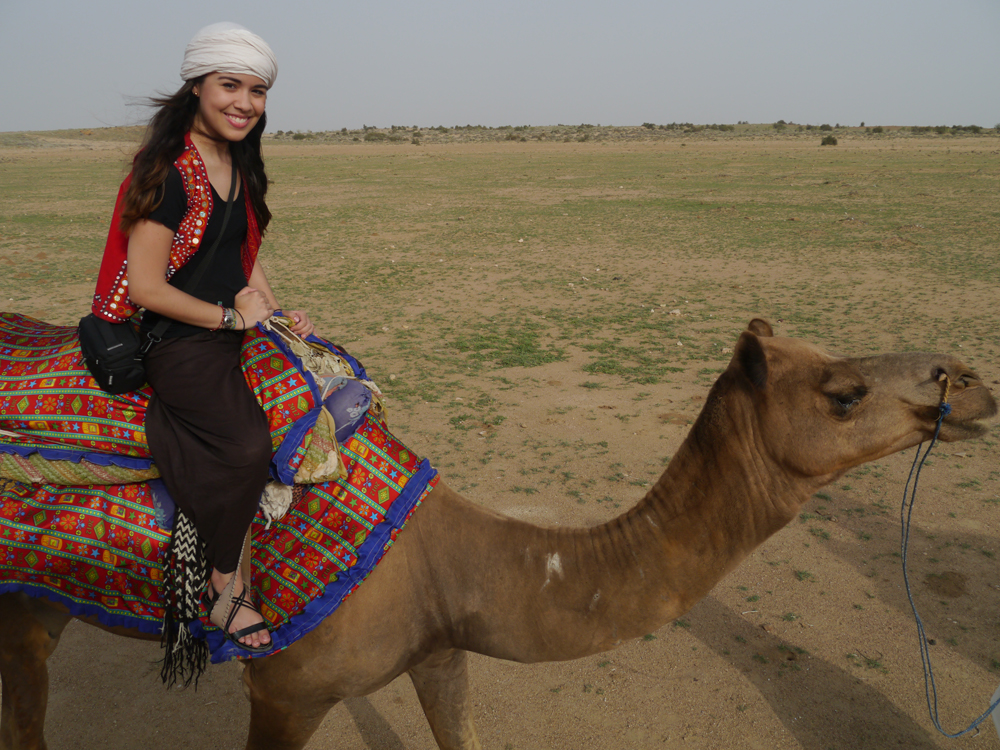 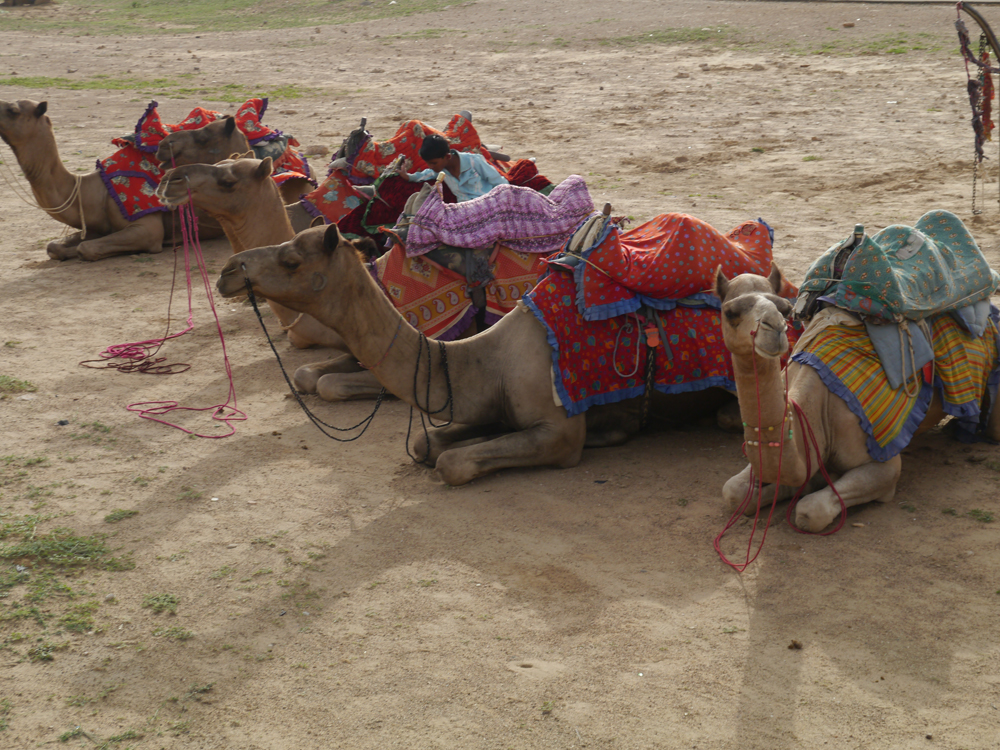 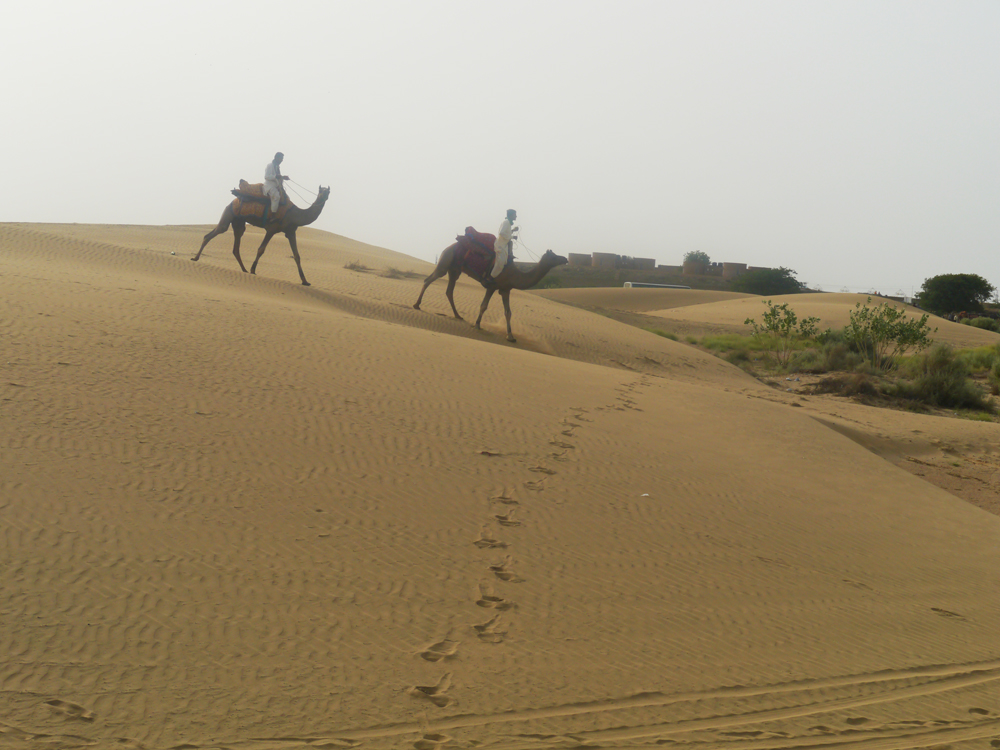 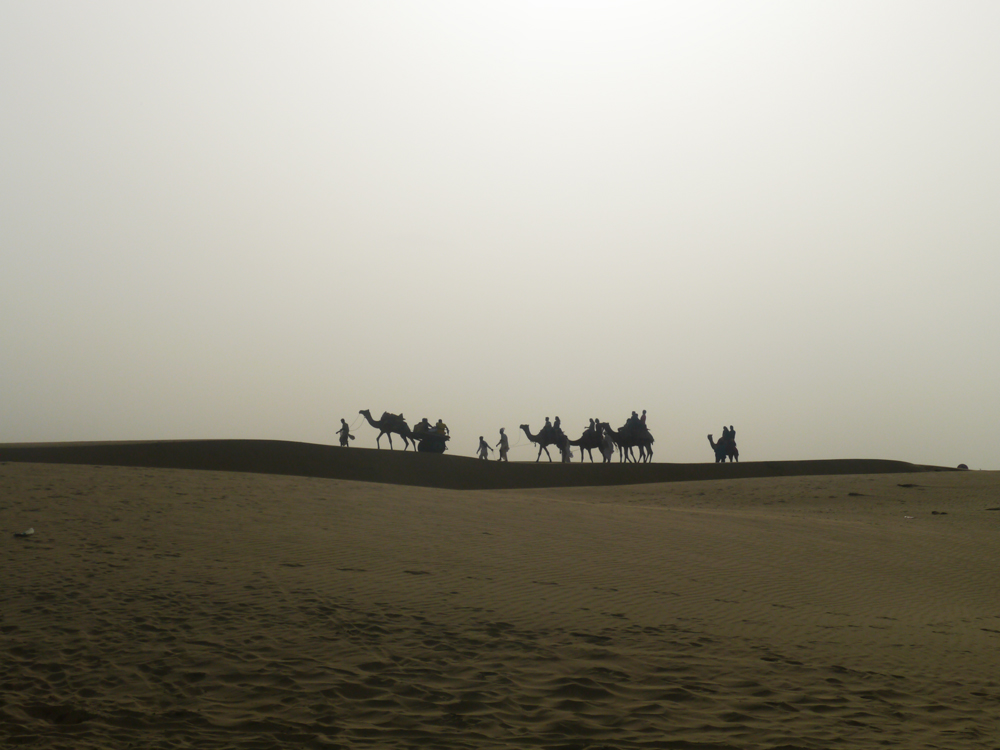 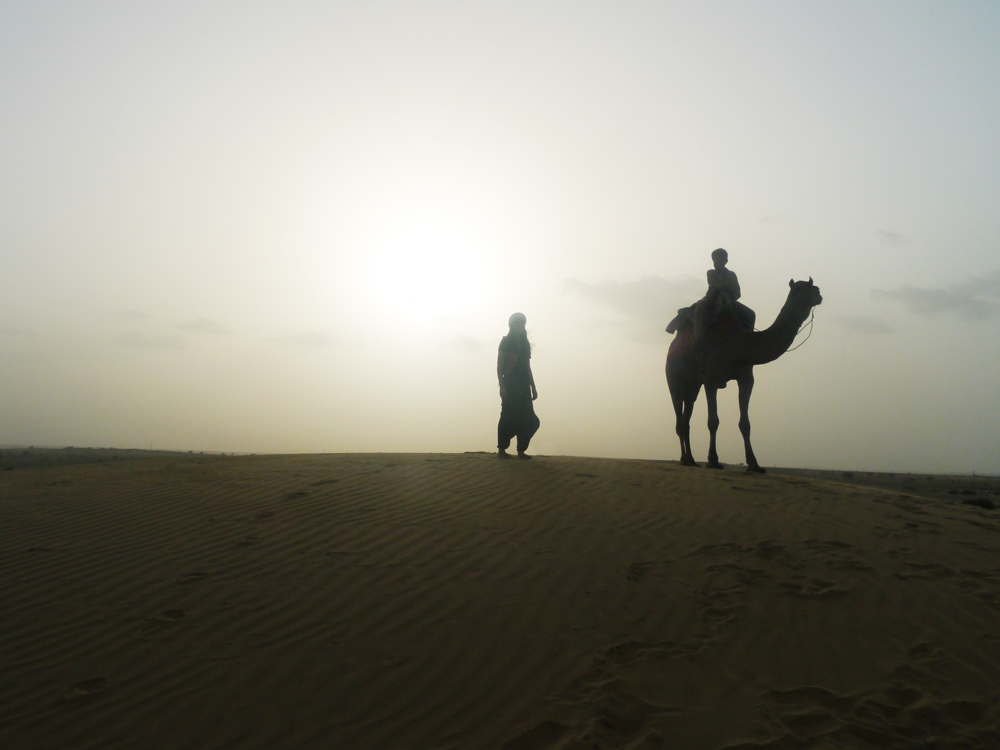 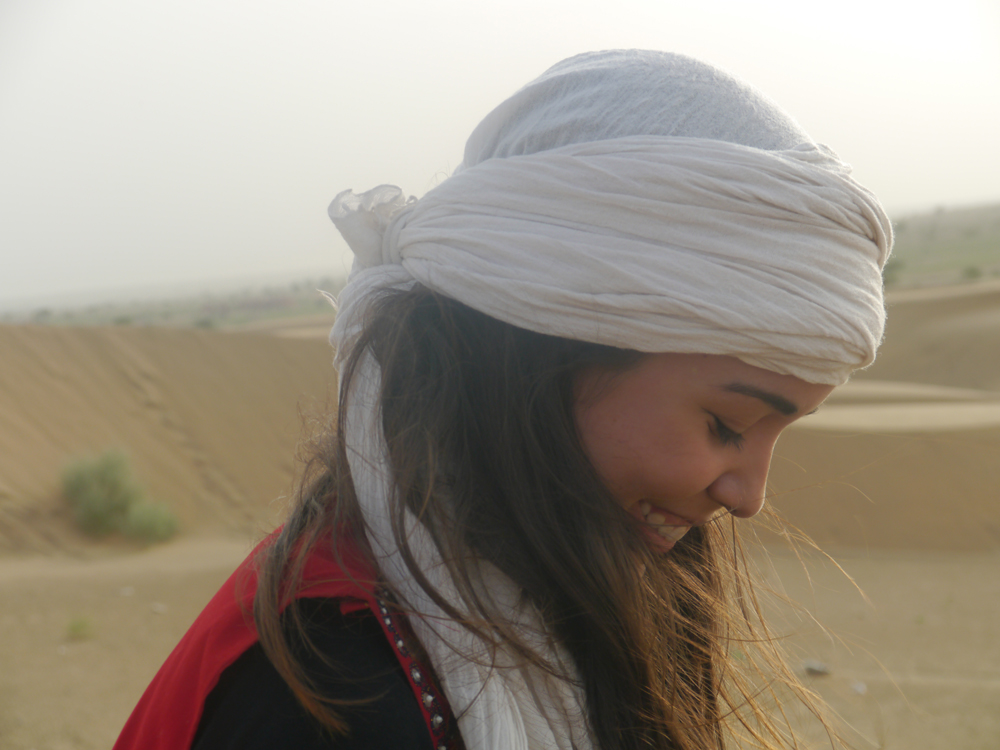 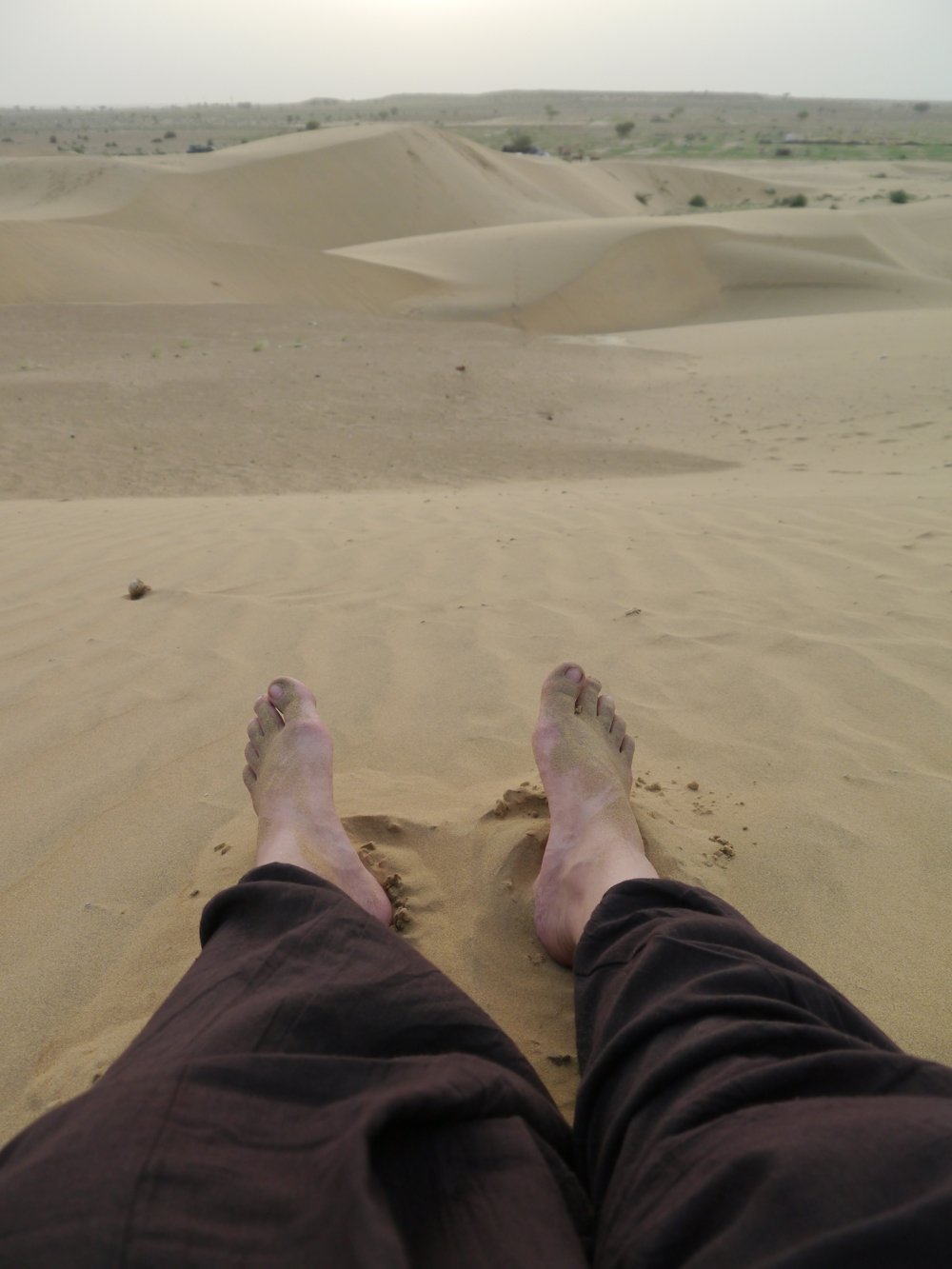 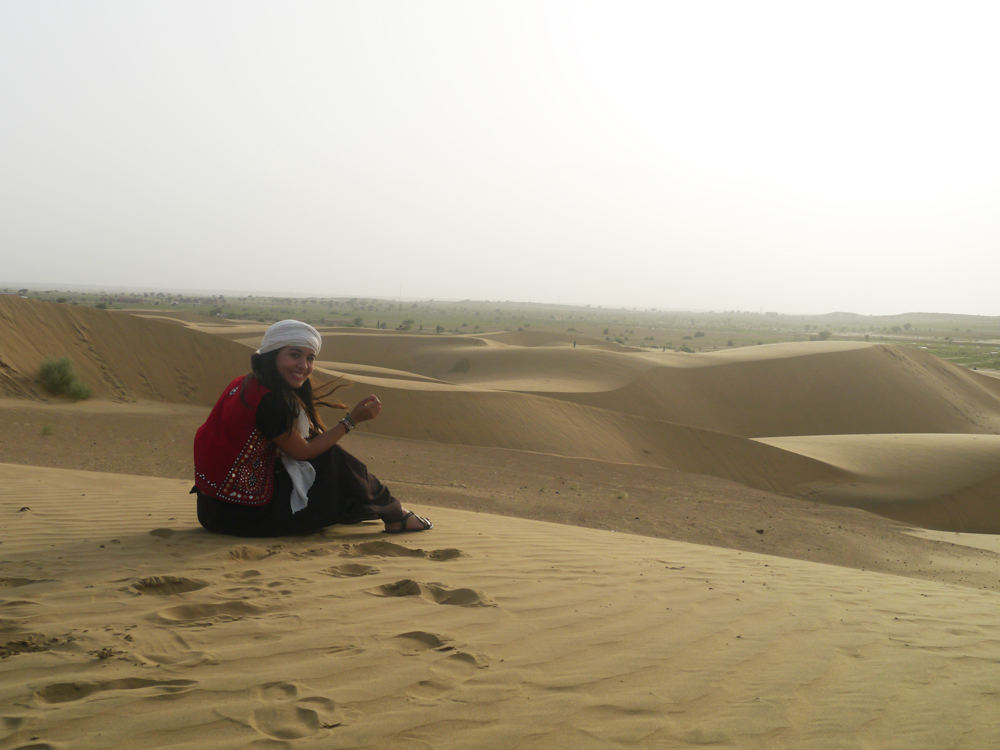 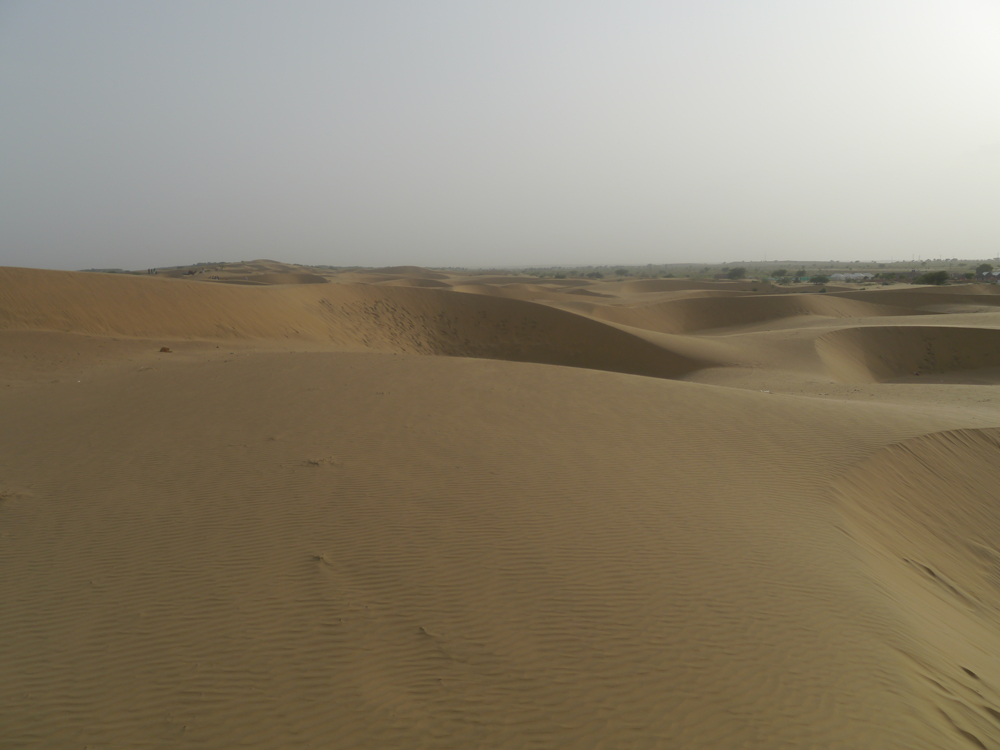 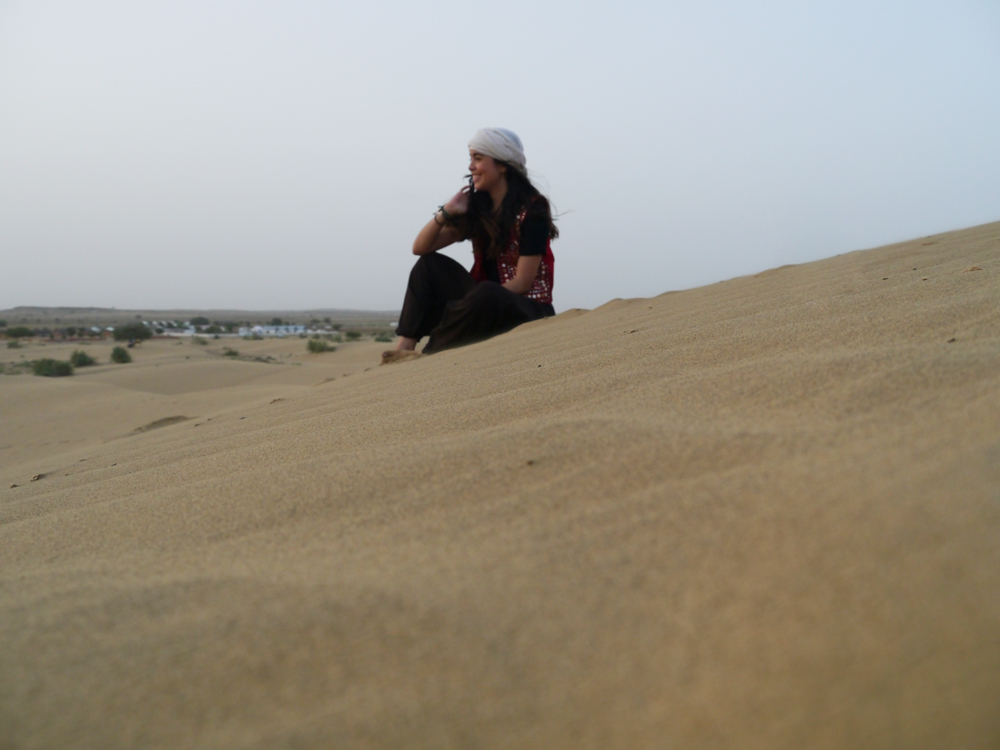 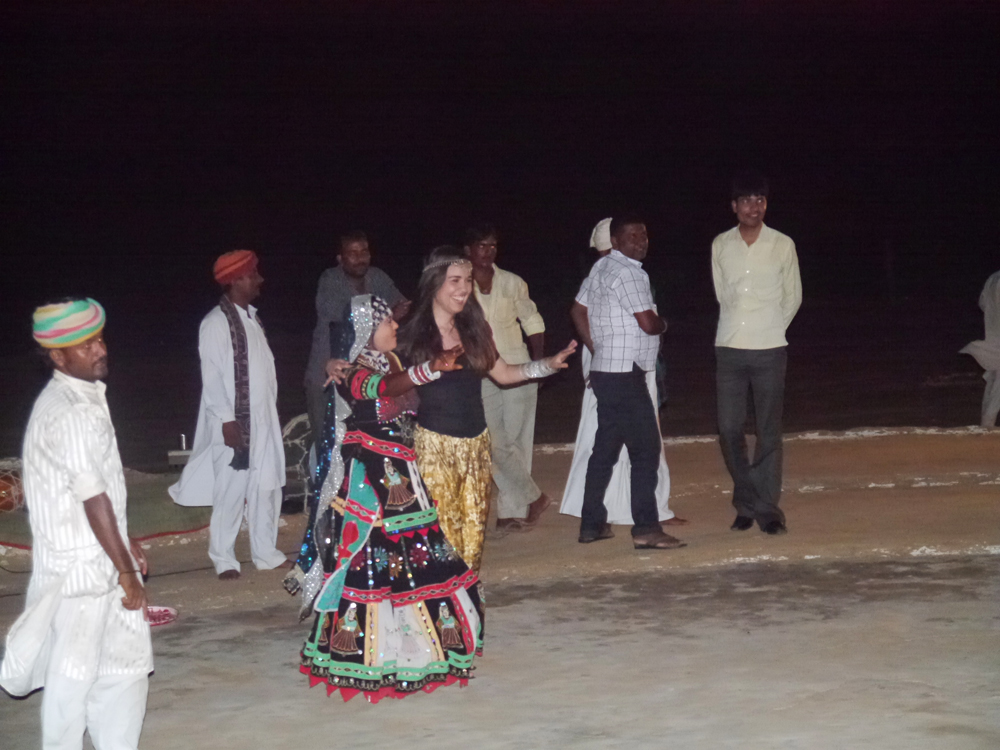 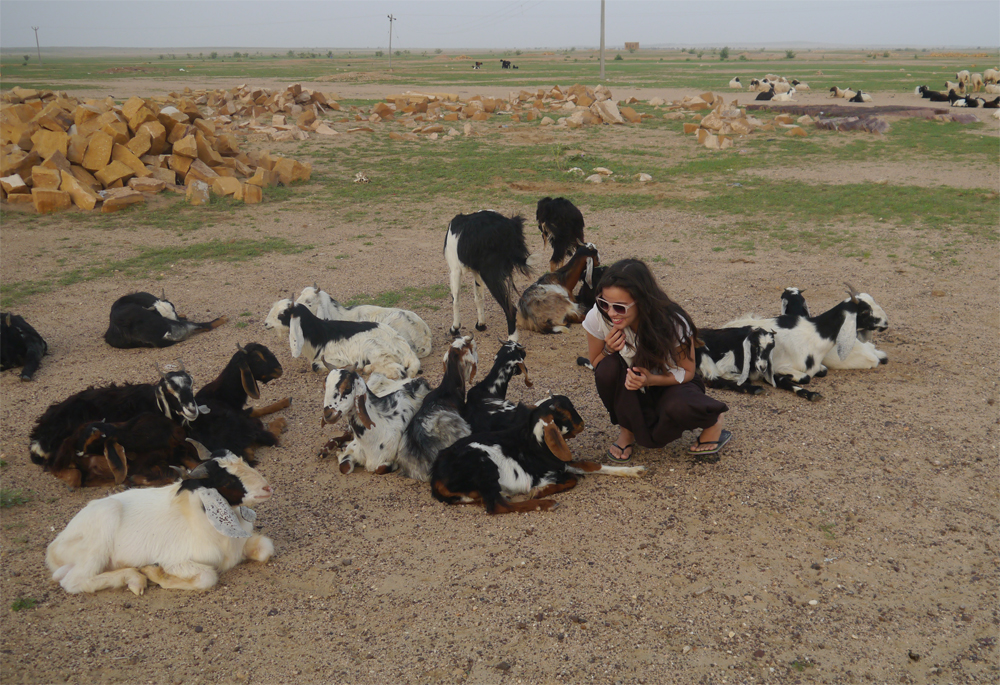 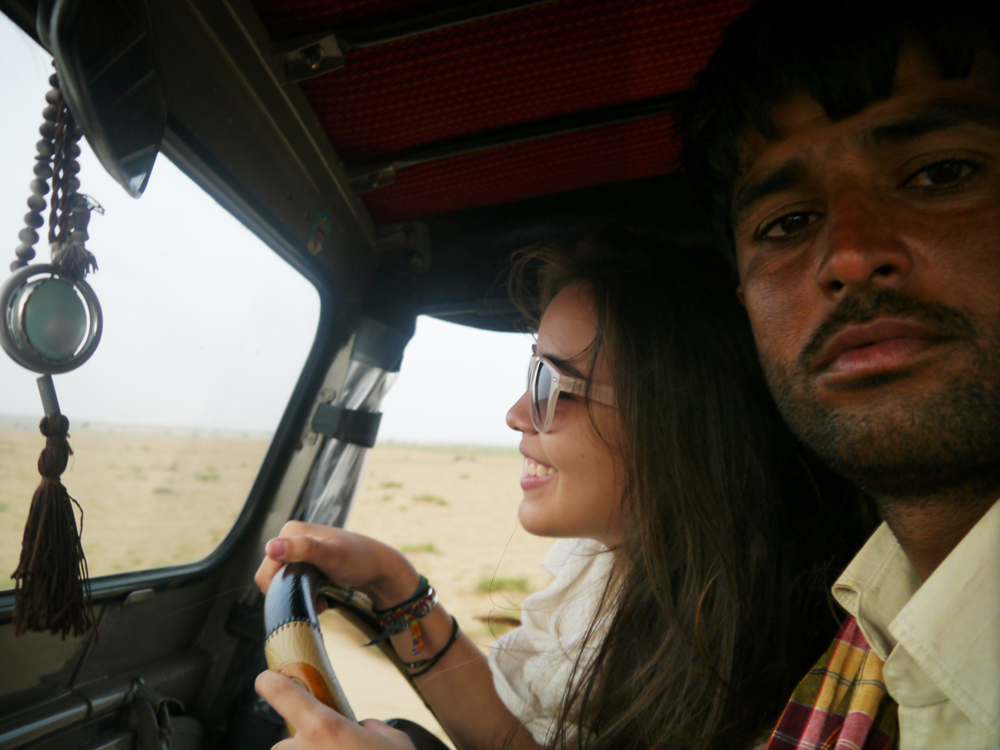 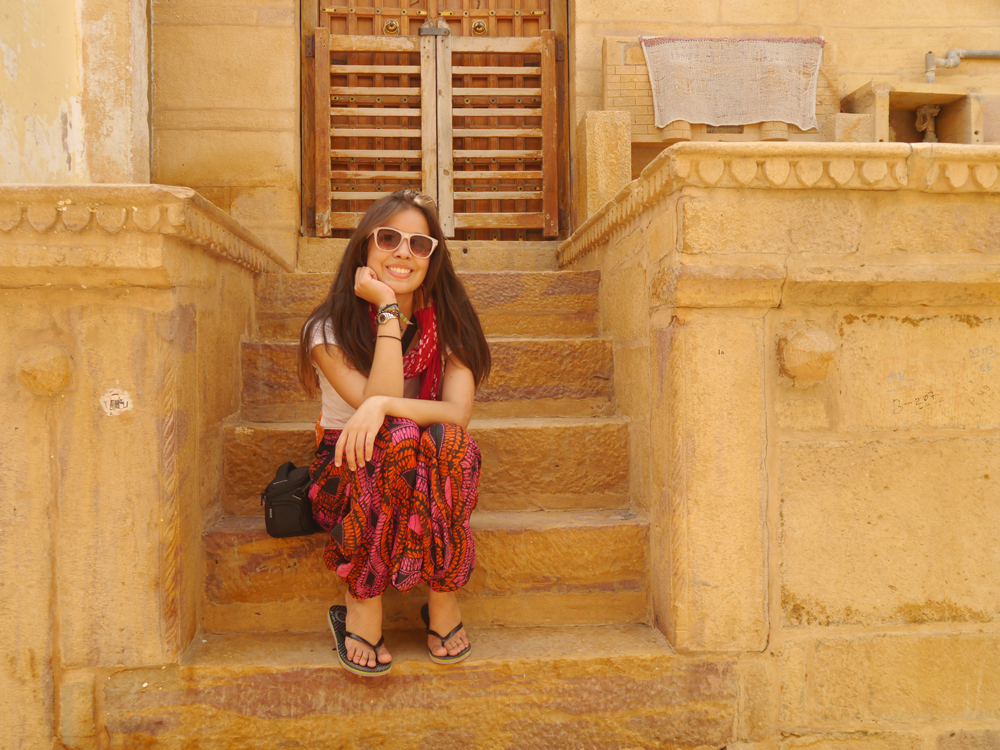 The day of our visit to the Thar desert, we woke up really early to find out we would be going there in the afternoon, since it is too hot to go during the day, so the better time is almost at sunset. So we decided to explore a little bit more of the Jaisalmer Fort, and left for the Thar desert around 3 p.m. It wasn’t a very long drive from Jaisalmer, after a couple of hours we arrived to the part where the safari begins, and all the camels are lying down and chilling. I was wearing the funniest outfit, but what can I say, I was totally in the mood for a ride on a camel in the middle of the desert.

We were on the camales for a long time, and it was great to see how the little bit of grass completely disappeared and was covered by the impressive and golden dunes.While doing the safari,  you ride on the came, but a guy goes next to you and works as your «guide» (and I guess that he is the person in charge of taking the camels back later). My guide was a kid around 16 years old and the camel was Michael Jackson (a very popular camel name apparently). The Thar Desert was the most beautiful place for photos! We played so much in the sand dunes like 5-year-old kids and we were so happy to live an experience as incredible as this.

Some people chooses to sleep in the dunes, but instead, we decided to go to a camp nearby and we stayed in little cabins, but they were so warm it made it hard for all of us to sleep. That night the people from the camp set up a music show and some typical Rajasthani dancers were entertaining the visitors, and we were invited to join them, showing them our best Colombian moves (except for our Canadian companion. Sorry Colin). They served dinner sort of «buffet» style, and we could choose Dhal (lentils) or Rajma (beans) with the traditional sides: chapati and rice.

The next day we woke up super early, at 4 a.m. because the idea was to be out before sunrise to go on a jeep safari around the dunes. We visited some villages and I was happy chasing the goats, and I also had the chance to drive the jeep at some point (I did okay for being my first time driving with a stick on the left side). After I gave back the jeep to our guide, he went all crazy driving into the dunes which was super fun. After seeing the sunrise, we headed back to the camp, ate breakfast and left back to Jaisalmer. We arrived almost at midday, went for lunch and stayed a couple of hours in the hotel. We went to the station to catch our 17-hour train back to Delhi at 5 p.m. and made it safely into the city almost at 11 a.m. It was one of the funniest  and easiest train rides of my life because while I was awake we were playing Mr. President and the rest of the time (10 hours) I slept like a baby. Perfect end to a perfect trip in Rajasthan!